Belize has brought in more tourism from cruises, but communities are concerned about the environmental and cultural impacts.

It’s 6 a.m. in Monkey River, a village in southern Belize, and not many people are awake. The silence was flooding the place until the crow of the roosters and the sound of starting motors interrupted the stillness of the summer morning. The tour guides are getting their boats ready to go to Placencia, a tourist destination 40 minutes north of this small, quiet community.

They will pick up tourists and bring them back to Monkey River to do the same tour they’ve done for at least 20 years.

Terry Garbutt, a 43-year-old local guide, hops into his 10-passenger boat and leaves the dock. It’s hot and it isn’t raining, so tours will be in high demand. Garbutt has nearly a dozen tourists waiting for him in Placencia.

On his way to town, he passes a small but luxurious island known as Harvest Caye. Ten years ago, Harvest Caye was a strip of land covered with dense vegetation, birds and other wildlife. In November 2016, it became Belize’s newest cruise port, owned exclusively by Norwegian Cruise Line.

Norwegian’s ships, which each carry between 2,000 and 4,200 tourists, stop at the caye as often as four times a day. The ship docks just offshore where passengers can take a smaller boat to the resort, which includes bars, a shopping area, a 15,000-square-foot swimming pool and a nature park. The resort also offers activities such as ziplining, kayaking and paddleboarding.

“We are delighted to welcome our first guests today,” said Norwegian Cruise Line President and Chief Executive Officer Frank Del Rio at the resort’s grand opening. “We have worked closely with the government of Belize to ensure that this spectacular destination was authentic for our guests.”

However, not everyone shared Del Rio’s enthusiasm.

“Do you see the lighthouse over there?” Garbutt will ask his passengers, pointing at the only tower on the seven-acre island. “It’s actually not even real, it’s just decoration.” He laughs sarcastically but then gets quiet.

Garbutt never really thought this multi-million dollar project was a good idea — in fact, he still doesn’t. Many of his friends and coworkers in Monkey River share the same feeling.

“We’re not getting anything from the cruise ship,” Garbutt said. “They’re not using much of the local guides so it’s a waste of time for us in southern Belize.” 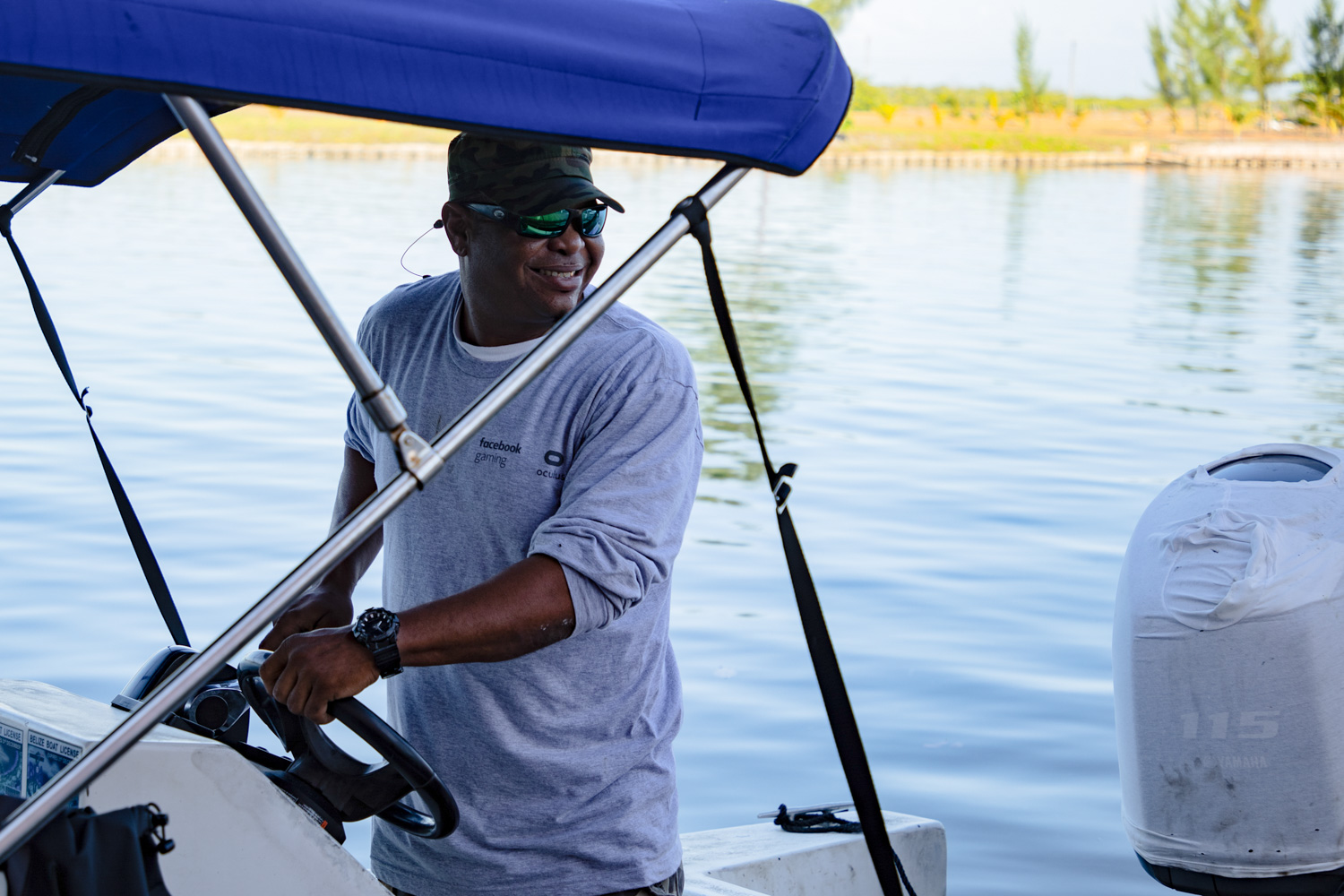 Terry Garbutt picks up his passengers as the tour gets underway to Monkey River. As a Monkey River Village native, Garbutt has been giving tours for 23 years. Photo by Madison Hoffmann.

Monkey River’s residents say that the cruise company employs very few local tour guides and shares little of its benefits with the village.

“We kind of put up with it because we thought it would have been bringing jobs to the area, you know, but after it comes by now, no one’s getting much from it,” Garbutt said.

But locals worry, too, about the environmental impacts.

One important part of the experience on these immense floating cities includes taking a “break from the break” to tour the most attractive areas of Belize. Monkey River’s residents complain that the cruise line’s tours are overloading the river and exacerbating coastal erosion in Monkey River.

“They have big boats, 35-40 footers, and they go really fast,” said Garbutt’s younger brother, Jeremy Garbutt, who also works as a tour guide.

Monkey River has been struggling with coastal erosion since the mid-1980s, according to research conducted by the Center for International Climate and Environmental Research in Oslo, Norway and the Department of International Environment and Development Studies at Norwegian University of Life Sciences. It’s hard for locals to remember exactly when erosion became a real problem, but it is easy to point out the damage it has caused. Coastal retreat has led to the loss of a soccer field, the sandy beach, houses and the community’s cemetery.

“Where that cemetery was, that was so far back into the jungle when I was a kid,” Terry said. “I never believed that we would have had some tombs washing in the ocean right now.”

Cruise ships have become one of the biggest contributors to Belize’s economy, with more than 300 ships and more than 1 million passengers arriving each year. According to an analysis prepared by Business Research & Economic Advisors (BREA) in October 2018, the total economic contribution of cruise tourism in Belize for the 2017/2018 Cruise Year was $US 86.12 million. However, many Belizeans believe that cruises cause sociocultural and environmental impacts such as few local residents participating in the industry and deterioration to the flora and fauna in destinations cruise tourists frequent.

“We really don’t care for the cruise line to be over here at all,” Jeremy said. “They want to make all the money from their guests, and the locals make nothing at all.”

One if by Land, Three if by Sea

Overnight tourism surpassed the population of Belize for the first time in 2016, but cruise passengers now outnumber citizens 3-to-1.

Earlier this year, a letter was written by the Monkey River Village Council. Frank Del Río, Norwegian President and Chief Executive Officer, was the chosen audience.

In eight paragraphs, the letter tries to summarize and resolve almost four years of disagreement. It’s an attempt to explain the main concerns of the community, but it also points out actions that, they believe, should be taken immediately in order to settle the conflict.

However, the letter was never sent. They needed the village mayor’s consent. But his opinion about the cruise industry is very different: the blank space without his signature made it clear. 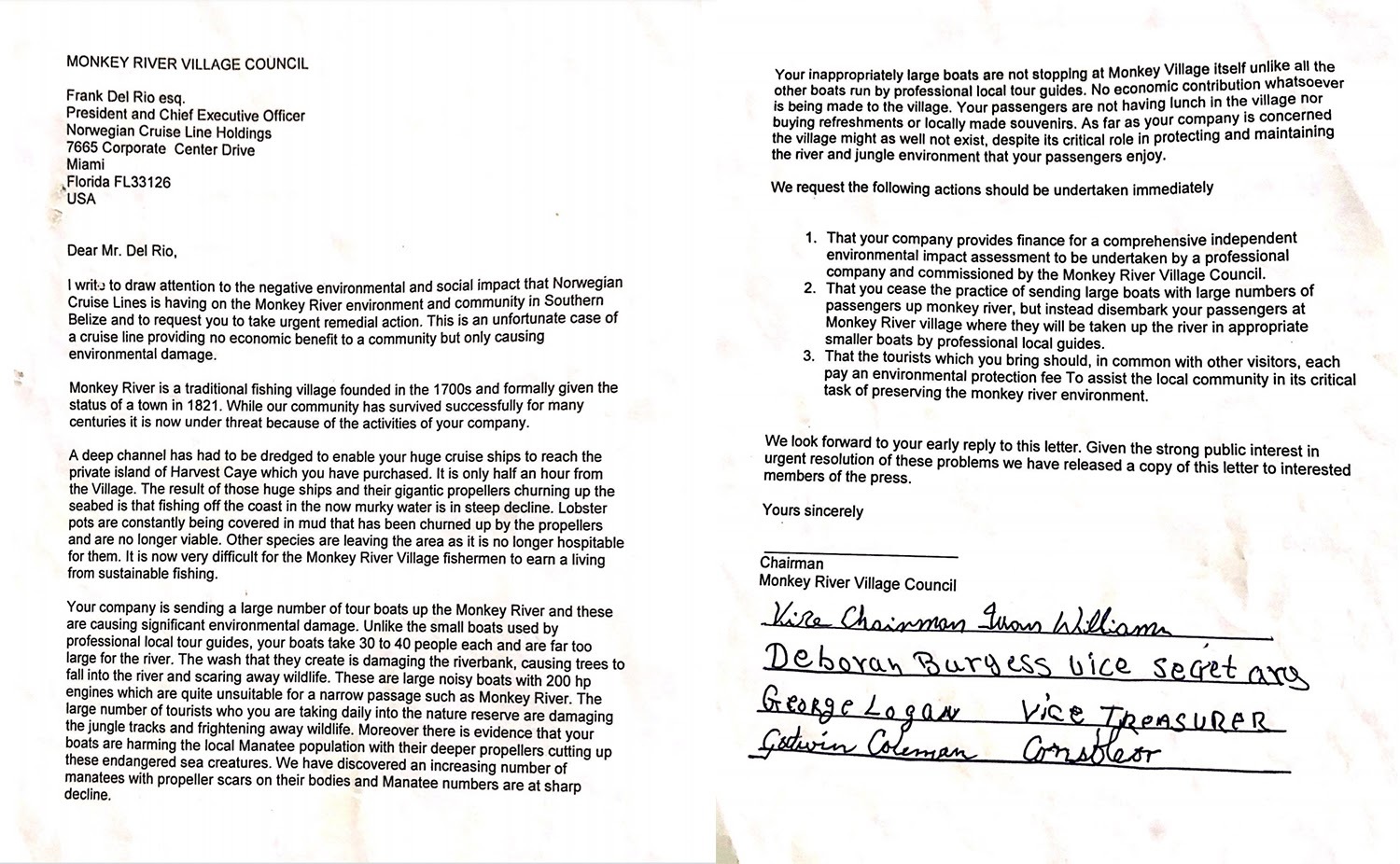 “We really can’t stop cruise ships, so I think the only thing we could do is work with them and try to benefit from them,” said Leonardo Castro, the village’s mayor.

But who is really benefiting? Many local guides say only three people from the village work for the cruise line and that the community isn’t receiving any financial gain from their employment.

Terry and Jeremy always bring their passengers back to Monkey River around 1 p.m. to have lunch, explore the village and maybe buy a small souvenir. That way the rest of the community could potentially benefit from tourism. However, the guides working for Norwegian have their own private gift shop and a snack bar in Monkey River. Locals complain that these private businesses are leaving the village without an opportunity to prosper from cruise tourism.

“If we would get a benefit from the cruise line, the boats that work for them would come onshore, buy a little gift, a little drink, snack or something. Everybody could get a benefit. But they don’t do that,” Ivan Williams, former mayor of Monkey River, said. 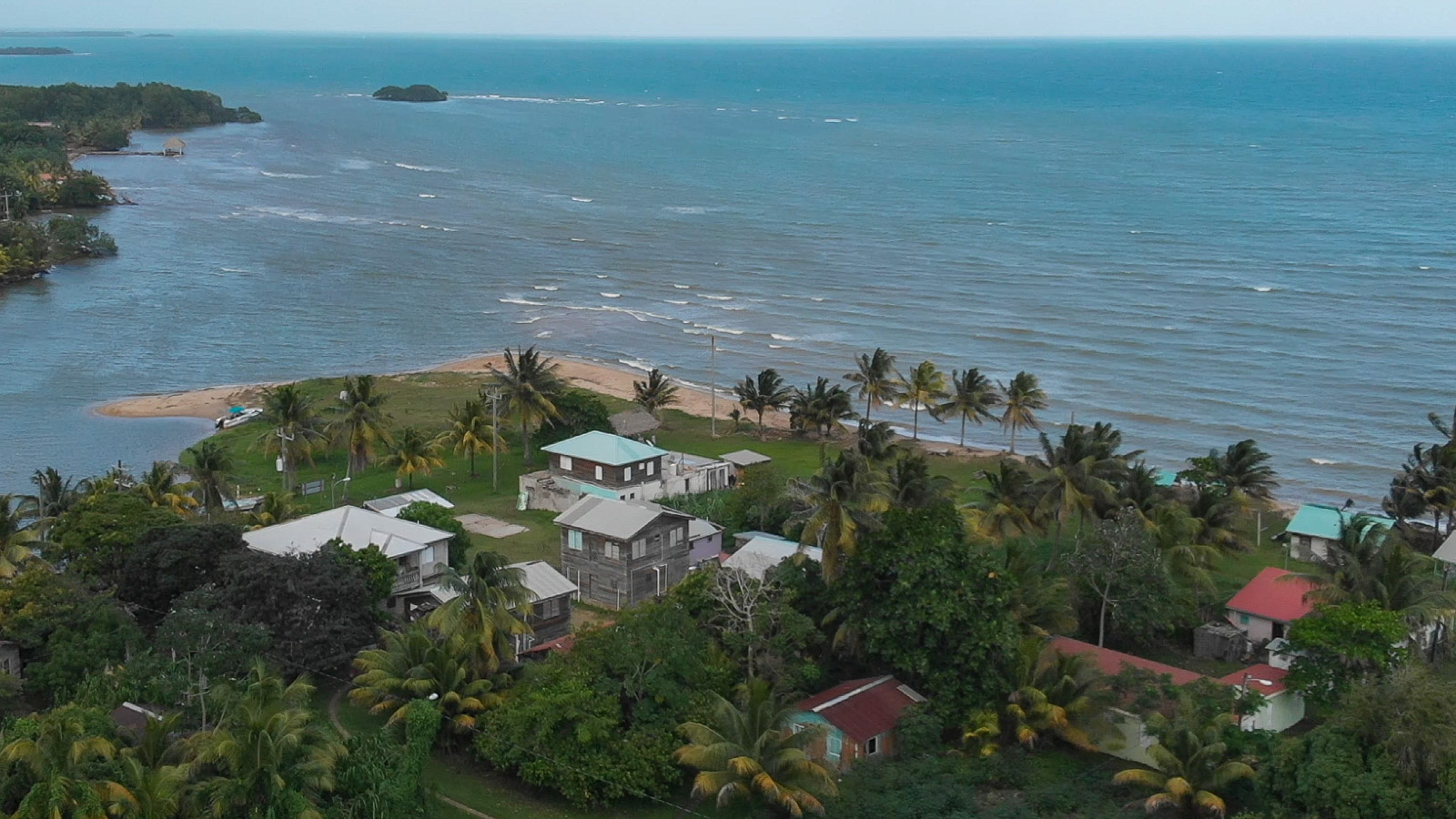 Monkey River Village, the northern most village in the Toledo District, is home to a population of roughly 300 people. It is one of the only communities in Belize that does not use cars. Photo by Hadley Green.

According to BREA’s analysis, about 57% of all cruise passengers purchased shore excursions in Belize during 2017/2018. Of these excursions, 74% were purchased from cruise lines, 16% directly from local tour operators and 10% from a travel agent or other means. The remaining 43% of passengers reported that they did not purchase a tour during their onshore visit.

Terry and Jeremy said the experience of the river and wildlife aren’t what they used to be even just five years ago. As the community continues to grapple with the impact of the cruise industry, the locals worry that Norwegian’s day trip boats drive too fast along the river, not only aggravating Monkey River’s coastal erosion but also scaring away and even harming animals in the area.

The letter wasn’t the community’s first effort to make themselves heard. In 2017, the Monkey River Village Council decided to start a petition to prevent any cruise company from running tourist excursions on the river. But regardless of the many signatures they collected, nothing changed the situation. Cruise ships weren’t going anywhere.

“It’s been throwing all these impacts without any benefits. So we hope that we could get it cleared up peacefully,” Jeremy said.

“I voted against it”

The agreement signed in 2013 between the government of Belize and Norwegian granted the cruise line a 25-year concession designating it as the only cruise port in southern Belize.

All kinds of questions and concerns started to arise.

“We had several stakeholder consultations at the time. And a lot of those concerns were then reflected in the management of the agreement,” said Noriko Gamero, director of destination planning and cruise at Belize Tourism Board. “So all of those comments were taken into consideration.”

But people weren’t satisfied with the cruise line’s answers. Not much time passed before they started to oppose the idea of ​​a private cruise port in southern Belize. Tour guides, tourism stakeholders, members and representatives of different organizations such as the Belize Tourism Industry Association (BTIA) and the Federation of Cruise Tourism Associations of Belize (FCTAB) were included. Local newspapers followed the situation closely and documented what was happening that year.

For vacationers, cruising is a chance to make memories that will last a lifetime. However, the environmental consequences that cruise ships create could last even longer.

Hover over the yellow circles to explore the environmental impacts.

Three years before, many Belizeans’ thoughts and feelings weren’t so different. In September 2010, the Belize Tourism Board contracted Seatone Consulting to perform an independent assessment to determine whether or not people in southern Belize wanted cruise tourism. The results of the survey might have disappointed some people, but locals had already spoken and cruises weren’t welcome in southern Belize.

As it appears in the final report: “Not only is there widespread resistance to the establishment of cruise tourism in Placencia, as demonstrated by public sentiment, there is also abundant and compelling evidence that communities in the surrounding area are ill prepared for cruise ship arrivals.”

“Pretty much all of southern Belize voted against the Norwegian Cruise Line,” Jeremy said.

“I voted against it,” he stressed.

Guides like Terry and Jeremy know that cruise tourism exists in their country, and little will change that. However, they believe they can provide a unique experience throughout their tours — something only local guides can offer.

“We know the place,” Terry said. “We were born and raised here. I think I can give the guests a different feel.” 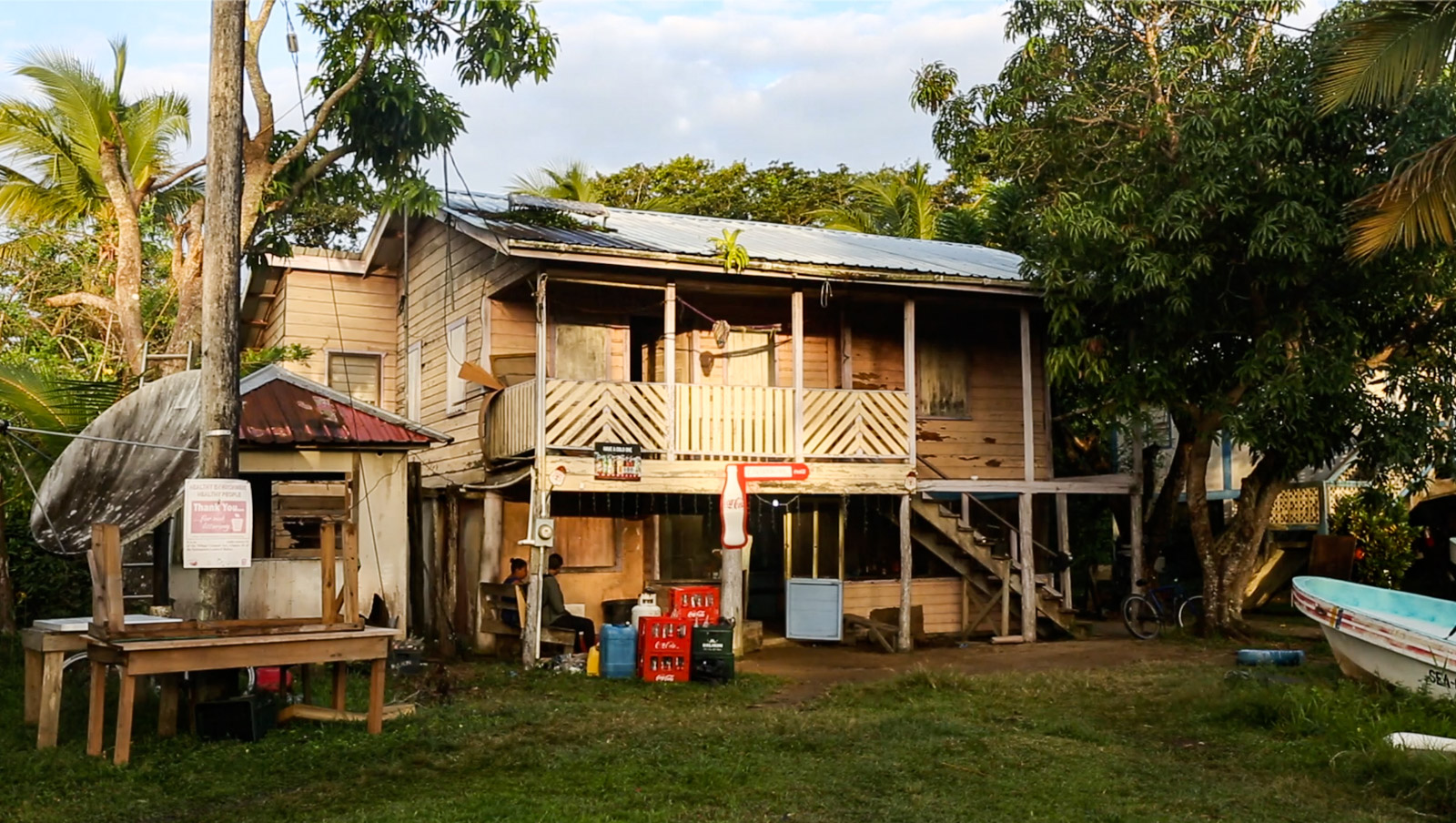 Garbutt’s Bar in Monkey River. It is a popular hangout spot for the guides after a day out on the boat. Photo by Hadley Green.

That faith is what keeps them going.

“Being a tour guide is like being an ambassador for your country,” Jeremy said. “I want tourists to always come back over here — that’s my big goal. Each day I go out, and I try my best.”

It’s around 2 p.m., and Terry is back in Placencia to drop off the tourists. Another long day of work has passed, and he is ready to return home and rest.

Once he’s back in Monkey River, he’ll go to the small bar he owns right next to his house. It’s located on the first floor of an old wooden house, which despite its weathered structure, has remained firm throughout the years — perhaps that strength and resistance is what inspires local tour guides.

Terry will meet with his friends and coworkers there and together they’ll watch a movie they find on the TV. The afternoon will go by fast as they drink beers and forget all their worries. Terry will be there, sitting still and silent, knowing that tomorrow will be a new day and that the fight continues.

Yet his hope for change remains strong.